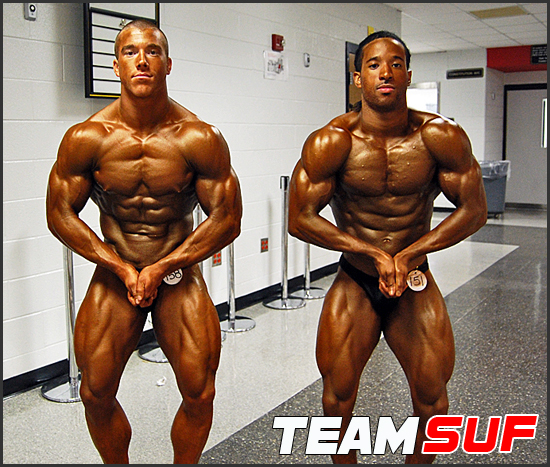 I heard alot about Brandon and Josh through SUF team member Cody Wyer. He had competed with these two at his OCB show prior to the Hercules in June. I linked up with these two just in time to prep them for the NGA Mount Rogers. I am very glad this happened as they are both great additions to the team.

Brandon is a monstrous heavyweight with awesome potential. When I looked into his past shows I saw that his only major weakness was his conditioning. This became our major focus for the prep. We were able to come in a few pounds lighter but much tighter than his previous shows. His look was unmatched and he was awarded 1st place in open heavyweights and an NGA Pro Card.

Josh was in a similar position to Brandon in terms of the conditioning. He posses so much size, but couldn’t nail the conditioning in the past shows. The decision was made to push him far lower in weight than his previous shows. This decision paid off as he brought a solid and shredded package to the show. He ended up taking 3rd place in the class, just barely missing the 2nd place spot.

This show was special to me because I made a surprise trip down to the show without the guys knowing I was coming down. The look on both of their faces when I walked into the cafeteria was priceless. I had a great time with the guys, and I really enjoyed my first NGA show. Next step is to get these two (nicknamed the Legion of Doom) up to New York for the 2014 INBF Hercules.